History of the Collegiate Day of Prayer

Throughout American history our colleges have been repeatedly blessed and transformed by intense seasons of spiritual awakening. The early records of many of our best universities read like a virtual history of spiritual revival. In fact, no other nation has ever enjoyed as many student awakenings for as many consecutive years as the United States of America. Some of the first reports of these student revivals emerged during the First Great Awakening in the eighteenth century. However, it was the Second Great Awakening (1790-1845) that produced our most powerful student revivals and the prayer movement that sustained them. This outpouring of grace was the fruit of the renewed monthly Concerts of Prayer in the mid 1780s. The awakening began in the Northeast in the early 1790s and then spread to the western frontier by 1800. It continued to touch almost every corner of our nation on into the mid 1840s. For literally half a century America experienced genuine revival in one part of our nation or another.

As the Students Go, So Goes the Nation

During this extended season of revival, church leaders began to apply the proven principles of the Concert of Prayer movement to the needs of college students. By 1815, the Concert of Prayer for Colleges had become a regular feature on the New England campuses of Yale, Williams, Brown and Middlebury. By 1823, almost every major denomination and university in America had embraced the practice of a concerted day of prayer for colleges. All the universities in America at this time had been founded through the Church and therefore were expected to supply the next generation of evangelical leaders. The American churches viewed these student communities as the coming future of their congregations, culture, and society. They believed that the direction of their churches and that of the whole nation would soon follow the spiritual bent and character of America’s college students — as the students go, so goes the nation. It was this kind of farseeing perspective about students that made the American Church quick to answer the call to a national day of prayer for colleges. 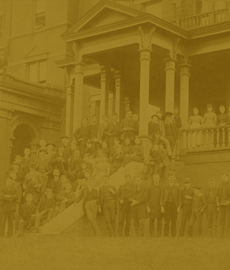 Henry C. Fish in his Handbook of Revivals gives us another account of the ongoing success of this special day of prayer. He says, “In the year 1823, the last Thursday of February each year was agreed upon as the day for special supplication that God would pour from on high His Spirit upon our Colleges and Seminaries. And what have been some of the results? In the years 1824 and 1825, revivals were experienced in 5 different colleges; in 1826, in 6 colleges; in 1831, in 19… In one of the colleges it is stated that a revival started on the very day of the concert of prayer. In 1835, not less than 18 revivals were reported by different colleges.” By the end of the 19th century, these repeated student awakenings had radically transformed the culture and moral climate of many of our largest universities. As a result, many of America’s ministers at this time were encouraging their congregations to send their children to college, if they wanted to see them safe and soundly converted.

At the height of this historic prayer movement’s strength, the American church was focusing on only about 200 universities. Today, 200 years later we have over 3,200 four year colleges and universities, and hundreds of two year institutions that desperately need the fervent prayers of God’s people.

When the eyes and prayers of the whole church are simultaneously focused on the needs of our college students, the God who loves united prayer will rise up and answer!

“This day is often the beginning of a revival in the college… It is impossible to estimate the influence of this great national prayer meeting.”  – Luther D. Wishard (1882)